I have a vision.  A strange but, solid one.

Usually, men are visual creatures —they get turned on by just looking at a hot woman wearing some nice black tights and some sexy heels. We are that easy. Really.

On the other hand, women are a little more sophisticated. They cannot be seriously turned on by just looking at a handsome guy walking by. The same guy has to actually show some interesting aspects such as being able to run and maintain a  nice conversation,  show some strong and vivid self-confidence and as cherry on top, some abs won’t hurt. 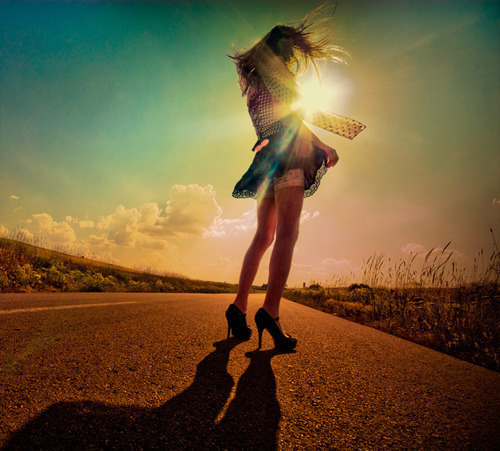 Now…  This is something you already know. I’m not trying to reinvent the wheel, but I’m just saying this as introduction of the vision I already mentionned.

Well, well… in my opinion, the rules of dating, will change. Completely. Let’say in the next ten or fifteen years, women will become VISUAL, and men, will become more subtle, sensitive, and especially, more… PICKY.

You cannot just show some boobies (you know what I mean…)  and get  him turned on. It won’t work anymore. You actually have to show some strong personal qualities that will make him attracted to you. At least, in the beginning.

One of the top  questions I get the most from my female readers and clients, is: “How do I get a man and KEEP him?”

Quick answer: your tights and heels will do the job, let’s say, for two weeks. He will be attracted partially, he will be calling, sending cute text messages, puting some « likes » and comments on your facebook and so on. He will be there.

However, the more time it takes for you to show some “healthy” qualities, the more he will be disconnected. As soon as soon he gets “the cookie”, he will be almost GONE. Forever.

You will never see him again.

Now… let me explain some more…

The question I get ” How to get a man and keep him” is actually wrong. Kind of. In the 21st century, where the laws and rules of the jungle apply, a decent woman should ask THIS question, instead: ” how to get an INTERESTING man, and keep him.”

You see, the word “interesting” is a KEY here. Once again… just show  some boobies and you got yourself a man.

Show some LEADERSHIP, CONFIDENCE, SPONTANEITY and MATURITY, there you go,  you got yourself an INTERESTING man.

Don’t let stupid bitches bullshit you— they are jealous of your success and happiness.

Back when I was living in Berlin, I met this girl, Sandra. She was loving, caring, sweet, feminine, and, most important, she was a STRONG woman, with a subtle sens of leadership. A “german feature”,  I thought. And I liked it.

We got along very quickly. Yet, another amazing quality I liked about her : she was spontaneaous and able to make quick and efficient decisions.

So after just 3 weeks of knowing each other, she invited me over to her house to spend Christmas with her parents and family. I was surprised. I was shocked.

But… there was this bitch. Her Friend.

“Sandra, what are you doing? You just met this guy, plus, he is from a diffrent culture and you don’t know anything about him. WAS MACHST DU????”

And there was another bitch:

“Sandra… are you serious? This guy looks like a motherfucker? Did you see what he is wrting about? Do you trust him?”

” Unglaublich… I don’t recoginze you Sandra. Really? You invite him over to your house? with you PARENTS? FOR CHRISTMAS???”

(Side note: I really miss speaking German. Sorry for the little words.)

So many bitches around here. Aren’t there?

If you’ve been reading my stuff for a long time, you know that I go straight to the point. I don’t like to brag or show off, but I consider my self a decent guy who has got some serious stuff going on. I have big projects, big plans and big dreams. I already achieved some, and the best is yet to come.

Therefore, I don’t have time to waste it with bitches. They are simply not worth my time.

And you know what?

I was a blessed man. Berlin is a wonderful city. It changed me. Completely.

Berlin was responsible for what happened to me. I decided to quit my fucking day job, and get serious about my own business. I got published in the biggest publishing house in France, I built my company, I met interesting business partners, and all of this, was thanks to Sandra.

Her trust, her confidence, and her beliefs, helped me a lot. She inspired me. She had a huge impact on me. In my life.

And now you’re asking… What’s the moral of the story?

To get an interesting man, you have got to do some real work. Soon, the dating market will change, and there will be no place for weak women who get easily tricked by their suroundings  and by the jealous bitches.